2019 was the first time I tracked all of the books I read in a year, and I enjoyed reviewing the list so much that I'm tracking what I read again this year. I read exactly 60 books, which makes me happy because it's a round number. (But I'm shooting for 100 this year!) You can read my impressions of many of these books in previous posts here, and of the books I read in December at the end of the list.

Please leave a comment and let me know what your favorite book(s) were last year! 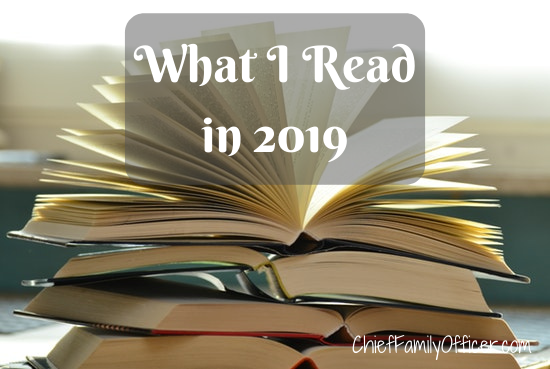 Here's a look at all that I read last year:
Note: This list contains affiliate links. Read my disclosure policy here.

A Discovery of Witches (All Souls Trilogy, Book 1) by Deborah Harkness
Insight: The Surprising Truth About How Others See Us, How We See Ourselves, and Why the Answers Matter More Than We Think by Tasha Eurich
Food Matters: A Guide to Conscious Eating by Mark Bittman
A Trail Through Time: The Chronicles of St. Mary's Book Four by Jodi Taylor
The Long and Short of It: Stories from the Chronicles of St. Mary's by Jodi Taylor

Crucible: A Thriller (Sigma Force Novels Book 14) by James Rollins
Deep Fathom by James Rollins
In a Pit with a Lion on a Snowy Day: How to Survive and Thrive When Opportunity Roars by Mark Batterson
Lies, Damned Lies, and History: The Chronicles of St. Mary's Book Seven by Jodi Taylor
And the Rest Is History: The Chronicles of St. Mary's Book Eight by Jodi Taylor

The Sixth Extinction: An Unnatural History by Elizabeth Kolbert
Outer Order, Inner Calm: Declutter and Organize to Make More Room for Happiness by Gretchen Rubin (audio)
Year of No Clutter: A Memoir by Eve Schaub
The Templars: The Rise and Spectacular Fall of God's Holy Warriors by Dan Jones (audio)
The Tipping Point: How Little Things Can Make a Big Difference by Malcolm Gladwell (audio)

Still Lives: A Novel by Maria Hummel
When: The Scientific Secrets of Perfect Timing by Daniel H. Pink (audio)
The Saturdays (Melendy Quartet Book 1) by Elizabeth Enright
On Writing: A Memoir of the Craft by Stephen King (audio)
Atomic Habits: An Easy & Proven Way to Build Good Habits & Break Bad Ones by James Clear

The Dorito Effect: The Surprising New Truth About Food and Flavor by Mark Schatzker
Zen Bender: A Decade-Long Enthusiastic Quest to Fix Everything (That Was Never Broken) by Stephanie Krikorian
Chasing Daylight:How My Forthcoming Death Transformed My Life by Eugene O'Kelly
Here If You Need Me by Kate Braestrup (audio)
The Best American Food Writing 2018 (The Best American Series) by Ruth Reichl (Editor)

Becoming Madeleine: A Biography of the Author of A Wrinkle in Time by Her Granddaughters by Charlotte Jones Voiklis and Léna Roy
To Sell Is Human: The Surprising Truth About Moving Others by Daniel H. Pink (audio)
Wildhood: The Astounding Connections between Human and Animal Adolescents by Barbara Natterson-Horowitz and Kathryn Bowers (audio)
The Wisdom of Sundays: Life-Changing Insights from Super Soul Conversations by Oprah Winfrey (audio)
Shadowfall: Book One of the Godslayer Chronicles by James Clemens

Hinterland: Book Two of the Godslayer Chronicles by James Clemens
Grit: The Power of Passion and Perseverance by Angela Duckworth (audio) - The boys and I listened to this book in the car in the mornings when I was driving them to school. I know most of the time, they were using their phones, but I'm hoping that at least some of what they heard soaked in. I absolutely loved this book. As an Obliger, I struggle to DO things sometimes, even (especially) the things *I* want to do. This book gave me more tools to help me get those things done.
Garlic and Sapphires: The Secret Life of a Critic in Disguise by Ruth Reichl (audio) - I remember hearing that Ruth Reichl wore disguises to restaurants when she was the restaurant critic at the New York Times, but I never knew the details until I listened to this memoir. She is my favorite food writer - her descriptions of the best meals make me green with envy. Reichl is also an excellent storyteller (and/or has an amazing editor). I loved how her disguises came to be, and was fascinated by the difference they made. I have to admit I've been wondering what life would be like if I got a total makeover and wore a wig!
A Question of Holmes: (Charlotte Holmes Novel Book 4) by Brittany Cavallaro (audio) - This audio novel was read by Julia Whelan, who read Ruth Reichl's novel Delicious!, which I listened to a couple of months ago and thoroughly enjoyed. I loved this one too, but I realized too late that this was a later book in a series I hadn't read yet.
The Whole30: The 30-Day Guide to Total Health and Food Freedom by Melissa Hartwig Urban and Dallas Urban - This book was a necessary precursor to doing the Whole30 in January.
at 1:30 PM