Braces: Saving money, What to eat, and More 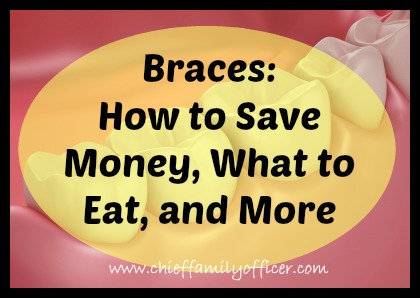 Did you know that kids get braces much earlier now than they did when we were kids?

Some of my boys' peers got theirs in second grade. I'm bringing up the subject right now because my fourth-grader just got his. This is "Phase One" - we're straightening some teeth for about eighteen months, and planning for another round of braces ("Phase Two") that will happen post-puberty. My poor kid also needs some teeth extracted to make space for the teeth that are coming in.

I didn't shop around for orthodontists in the sense of visiting a few and seeing who we liked best and was the most reasonably priced. I did talk with some friends about prices and reputations. But it turned out that we loved the first office we went to, and everyone who personally knows or knows someone who knows our orthodontist only has good things to say. Compared to costs quoted to several friends, our orthodontist is also very affordable and I'd actually be happy to pay a small premium for how well his office is run.

Unfortunately, I really didn't think things through financially when I agreed to have the braces put on this month. The cost is a lump sum charge, rather than a per-visit fee. I think we could have waited until January, so that I could ensure our Flexible Spending Account would cover the entire amount. In fact, my two biggest money-saving tips for orthodonture would be to ensure that your orthodontist's fees are reasonable for your region, and to pay for the process with tax-free money through your Flexible Savings or other tax-advantaged account (like a Health Savings Account).

With our Flexible Spending Account, we only get reimbursed for expenses that occurred in that calendar year, up to the amount that we contributed. For example, I can't be reimbursed from our 2014 account for a doctor's visit that I made in 2013. And if we go over our contribution amount, then we have to pay that overage out of pocket (with money that we paid taxes on). In the case of our orthodontics, I realized too late that we don't have enough money remaining in our 2014 Flexible Spending Account to cover the full lump sum being charged by the orthodontist. So I'm hoping that some of the charges can be applied to adjustments in 2015, which would allow me to pay for some of the costs from our 2014 Flexible Spending Account, and the remainder from next year's.

The other big issue I've been dealing with, aside from paying for the braces, is feeding the boy who now has them. He finally seems to be getting used to them, as he complained less about the pain this morning. Here are some of the soft foods we've tried or at least thought of:

I personally would have had delicacies like egg salad and mashed potatoes but my son doesn't like them.

What would you (or your child) eat if your teeth were sore?

Image via FreeDigitalPhotos.net by maen_cg.
at 4:00 AM

Great ideas, Marie! He loves refried beans, and I might be able to get him to eat oatmeal :) I also have some bananas that would be perfect for soft serve. Thank you!!!