The Key to a Clean House: Less Stuff 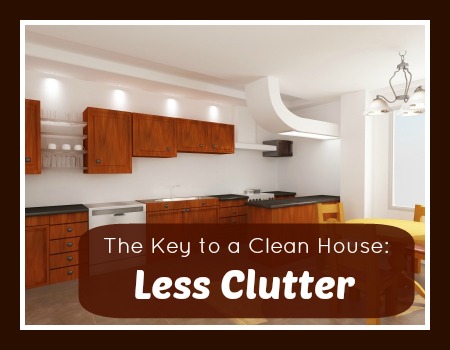 Our kitchen light had been acting up for years, but the other day it finally stopped turning on when the switch was flipped {it did eventually turn on, but it was rather unpredictable!}. So we decided we couldn't postpone the work any longer, and had an electrician out to replace the light as well as the old, rattly ceiling light/fan combo in the back half of the kitchen.

Since I knew they'd be working in the kitchen, I removed everything that I could - my back up laptop, small appliances, a couple of small butternut squashes ... everything that didn't need to stay found a new {sometimes temporary} home.

When the work was done, I walked into the kitchen - and delighted in the bright light, but marveled even more at how great the cleared countertops looked.

Although the workers were neat, there was still some cleaning that needed to be done. And normally I hate cleaning and put it off for as long as possible, but I discovered something that might just revolutionize my home: It was incredibly easy to clean the kitchen because I didn't have to move anything. It took just seconds to wipe down the counters. I used wet and dry Swiffer cloths to give the floor a quick scrub. And I even washed my dish rack and its mat - all in about 15 minutes!

And then maybe I wouldn't put if off for as long as I do.

So now I'm on a quest: to declutter my house from top to bottom, wall to wall. I'm going through my own stuff, but also anything and everything that's in a common area, as well as the kids' room. I know it's going to take a while - I'm giving myself the year to go through everything, so that hopefully by the end of 2014, my house is optimal easy-to-clean shape.

Do you have a secret for keeping a clean house?

This post will be linked to Thrifty Thursday at Living Well, Spending Less.

Image via FreeDigitalPhotos.net by David Castillo Dominici.
at 4:00 AM

We recently sold our home. In order to prepare to sell it we rented a storage untin and removed all non essential items. The house has been much cleaner and much easier to maintain. We've decided to sell most of the stuff in storage. So I concur.

I've been feeling the same way...mission declutter is happening in our casa too! :-)

Any tips? One thing that's been working for me is trying to notice things that I can get rid of, like something that's been sitting in my pantry for a couple of years, or a shirt I haven't worn in a long time.

Oh, that sounds fabulous! I hope you make lots of money :)

Maybe that's my problem ... I've never lived this long in one place. Maybe we need to move, LOL! :D

Hey I came over here from Living Well, Spending Less. Great post! Thanks for sharing.

My best tip is to buy quality. Buy something once and use it until it's destroyed and you can no longer fix it. Two examples - . I have one pair of black pumps and have worn them for over 6 years. I found a good cobbler and get them fixed once in a while and they're better than new (because they're all broken in and comfy!). They're just now starting to show their age, but they only cost about $12/year so i might be able to splurge on the next pair-but i won't. The other example is our comforter. I ripped it when it got stuck on the bed while making it up. I was really dismayed, thinking it was junk until i realized we got it as a wedding gift - 12 years ago!!! It was actually made exceedingly well as it had been crammed in the washer a zillion times during it's life. I'm still using it, i'm just a little sad about seeing it go. And haven't found that 'perfect' one that i can use for the next 12 years!

That's a great tip for keeping the house clutter-free! Good luck on your quest for a new comforter :)

{Maybe you could sew up the rip, and then find a cover you love instead of a whole new comforter?}