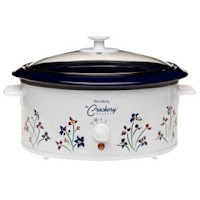 This isn't a new tip, but with the 100 degree weather we've had lately here in Southern California, it's worth repeating:

Your slow cooker is your friend.
On Monday, I made Turkey Sloppy Joes in the slow cooker. I bring this up because several of my colleagues were openly admiring the leftovers that I had for lunch on Tuesday. I adapted my usual recipe for the crockpot by browning two pounds of ground turkey on Sunday afternoon, draining it, and transferring it to the crock. I doubled the rest of the ingredients and added them to the turkey, along with 1 to 1 1/2 cups of chicken broth. (The sauce is thick, and I didn't want it to burn.) The I put the lid on and put the whole crock in the fridge. On Monday morning, I popped the crock in and turned it to low. The sloppy joes cooked for 11 hours. When we got home, I removed the lid to let some of the extra moisture escape. (The long cooking time is perfectly fine with this dish; the meat just gets really tender.) Because I made a double batch, three of us took this for lunch (Alex isn't crazy about this so he had leftover pizza from Sunday) and there was still enough left over to freeze for another meal.

And that's my Works for Me Wednesday tip: Use your slow cooker!

Incidentally, thanks to Mommy Making Money, I've discovered a very cool site called A Year of Crockpotting. Steph is using her crockpot every day this year and blogging about it, so she's got a ton of recipes on her site. (And she's on today's Rachael Ray show!) She's putting together a best-of list, but in the meantime, here are a few that she pointed out to me that I'll be making in the next few weeks:
For more Works for Me Wednesday tips, head over to Rocks in my Dryer.

Yes! Slow cookers are the greatest, especially during the hot summer months. I always take leftovers to work and I love when my hungry co-workers comment on my meals, especially when they took so little prep work!

Thanks for the link to the slowcooker website. I'm DROOLING, which is very inconvenient since I'm on my lunch break at WORK! LOL!

Thanks for the link to the crock pot for a year. I can't wait to see what the chocolate frito candy is all about. I better go get lunch now, your turkey sloppy joes sound awesome!

we couldn't survive without our slow cooker. Especially during the summer when many hours after work are spent riding. There is simply not much energy left for cooking after 3-5 hours on the bikes. =)

I need to do more crockpotting. (Is that even a term?) I envy you the turkey joes. They sound yummy.

thank you for linking to my site!

the frito candy is a MUST MAKE!

@Ames - I agree, it's gratifying when my friends are envious ;)

@Mar - I hope you'll make something soon, so you can drool and eat at the same time :)

@Audra - The turkey sloppy joes are tasty and easy, so it just doesn't get any better than that! Steph says the frito candy is a must-make, so if you try it, let us know what you think.

@Aaron - I agree, I use my slow cooker year-round. Anything that saves me time in the evening is a huge help.

@mustbekarmah - I encourage you to make the sloppy joes yourself. It's super easy, and you could even halve the recipe and crockpot it in a mini slow cooker. (Hm, doesn't quite sound right as a verb, does it?)

@Steph - Thank you! Don't worry, that frito candy is definitely on my make list :)