One Thing I'm Glad I've Said to My Kids

My boys are now 14 and 12, and we've had our share of conflicts over the years. There were times when I was so frustrated with them that I just wanted to give up. I no longer remember the specific cause, but I do know that there were times when I decided to do just that. I walked away, resigned.

But after a few times of walking away, I realized I never meant it. And so I started telling them that. I would say, "I'm frustrated, and I don't know how we're going to get through this, but I'm not giving up. You're my son and I love you, so I can't."

At first, I don't think they believed me. They would ask, "Why? Just go away."

And the answer to that was always, "I love you, even though we're going through a rough patch." 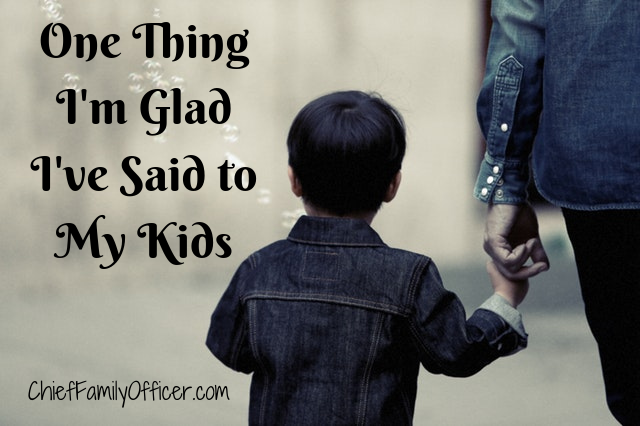 I've come to realize that since I started saying this years ago, it's given a certain stability to our conflicts today. They don't have the doubt that I used to sense when they were younger, that somehow I would stop loving them.

As parents, we love our children so completely that I think sometimes it's impossible to believe anyone would doubt our feelings - especially the object of those feelings. But even though actions can speak louder than words, words are important, too.

If I'd never said anything but kept showing up, eventually my kids would have realized that I'll always be there for them.

But by telling them as well as showing them, my kids understood that I was making a conscious decision to be there for them. And that reassurance has made a big difference.

What are you glad you've said to your children?
at 3:00 AM

Email ThisBlogThis!Share to TwitterShare to FacebookShare to Pinterest
Labels: parenting