If you get the CFO newsletter, then you already know that I've been thinking a lot about food this year. It started because I read Food Matters: A Guide to Conscious Eating with More Than 75 Recipes by Mark Bittman - I think I'd been on the waiting list for the Kindle version at the library, and it became available to me so I borrowed and read it, not expecting to get as much out of it as I did. 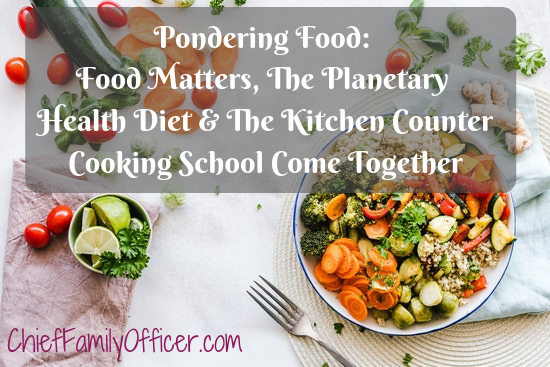 But it really got me thinking, the way it tied our arguably unhealthy American diets into the health of the planet. I'd known vaguely that it takes far more resources to produce animal products, particularly beef, than it does to produce, well, produce. Bittman laid it out in a way that resonated with me, probably because of the way he cited the grim statistics about the unsustainability of the current food market, the disturbing way "Big Food" companies manipulate the government's messages about what's healthy, and the changes in his own health when he cut back on meat.

Ever since finishing Food Matters early in January, I've been a lot more conscious about reducing the amount of meat I cook, and serving a lot more vegetables, fruit, and grains. 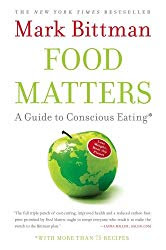 Then I saw that Mark Bittman's message has recently been reiterated by The Planetary Health Diet. Food Matters was published in 2009, so it's been 10 years and it took that long for the message to get to me, even though I think of myself as fairly food conscious. I found myself wondering if I'm as knowledgeable about food as I think I am.

My self-perception was challenged even more earlier this month, when I read The Kitchen Counter Cooking School: How a Few Simple Lessons Transformed Nine Culinary Novices into Fearless Home Cooks, which had been on my list of books to read for a while. I don't remember how I came to add it to my list, but the writing is excellent. The author, a food writer who trained at Le Cordon Bleu, writes about finding a group of women who didn't have any confidence in the kitchen and teaching them, over the course of a few months, some cooking basics, like knife skills, how to cut up a chicken, how to make no-knead bread, and so on. 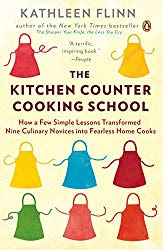 As I first got into the book, I felt like I had nothing in common with the students, since I feel pretty confident in the kitchen. After all, I cook and bake all the time.

The thing is, as I read about the lessons, I realized I don't know nearly as much as I thought I did, or as I now want to. Unlike the students, who started out afraid to cook chicken, I cook chicken all the time. But they learned how to cut a whole chicken into its eight parts and how to turn it into stock. I've done both, but not well, and so I'm actually not confident about my abilities in that regard.

The lessons in Kitchen Counter Cooking School included how to use up leftovers, and I realized that I throw away quite a lot of food. It might be the leftovers of a meal that we didn't enjoy, some unused sour cream that expired, a boiled egg that we didn't eat and now is probably unsafe, etc. I also realized that I probably overbuy when things are on sale - and while the items might not be perishable, making things from scratch (like stock or pasta) would probably be cheaper, healthier, and tastier.

So where do I go from here? My first priority is to use up what I have in my freezer and pantry.

While that's going on, I'm going to take some classes. I'm going to see if there are any local classes I can take (if you know of any in the San Fernando Valley, please let me know). And of course there are lots of online classes - I've got a free knife skills class from Craftsy that I haven't watched in the six months since I got it. And there must be lots of videos that show how to properly butcher a chicken.

I'm also, of course, now trying very hard to use up the bits of food lurking in the fridge and freezer, and to not throw food away anymore. For environmental as well as financial reasons.

Finally, I'm going to continue developing dishes and a palate that's plant-centric rather than protein- or meat-centric. One of the boys has a legume and nut allergy that limits some of my options, but I'm confident we can still dramatically reduce the amount of meat we eat. And that will be good for our health and the health of the planet.
at 3:30 AM

Email ThisBlogThis!Share to TwitterShare to FacebookShare to Pinterest
Labels: food