It's Never Too Late to Be Better

I played tennis when I was growing up, and have remained a huge fan of the sport. The Australian Open, the first major tournament of the year, concluded a few days ago, and the players in the women's final were both veterans. Thinking about their match, I realized they are both shining examples of how we can continue to grow and improve no matter what our situation is. 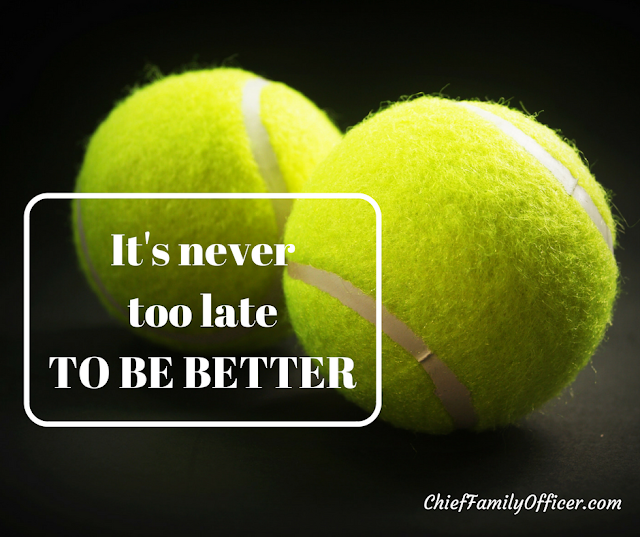 The victor was Caroline Wozniacki, the older of the two women (at the ripe old age of 27). She's been on the tour for many years, and I've always enjoyed watching her play. She became the number one player in the world back in 2010, but never won a major tournament and slipped in the rankings. I would have said a few years ago that it looked like Caroline had reached her peak as a tennis player, but I'm thrilled that I would have been wrong. She's worked hard to hit a better, harder serve, and comes into the net quite a bit now - both significant changes that contributed to her first major title.

The runner-up was Simona Halep (slightly younger at 26), whom I actually never rooted for until this tournament because she seemed, well, unlikeable. If she struggled in a match, she tended to melt down. But not anymore. She's worked really hard to get tough mentally, and it showed in almost every match during the Australian Open. In the first round, she sprained her ankle badly, but toughed it out and won the match. In the third round, she played an epic match in which she had to overcome multiple match points against her. She also faced match points in her semifinal match against a player who'd owned her in the past, and she hung tough in the final too. It was such a grueling tournament that Simona had to be hospitalized for severe dehydration after the final.

These women are relatable examples of our never-ending ability to change and grow. They've reminded me that despite my age (I just had to get reading glasses - gah!), I can still learn how to do things better, change my mindset, and persevere. That includes everything from my continuing struggle to lose weight to growing this web site to being a better parent.

I'm so inspired by both of these women, who are definitely both winners in life. Who's been a hero to you recently?
at 5:30 AM