Coupon Update: I went without inserts for six months

I'm not sure why I haven't discussed this before, but I went six months without getting insert coupons from the newspaper. Part of me wanted to see how it went - if I really missed them. But mostly, I just didn't want to pay the rate the LA Times wanted. 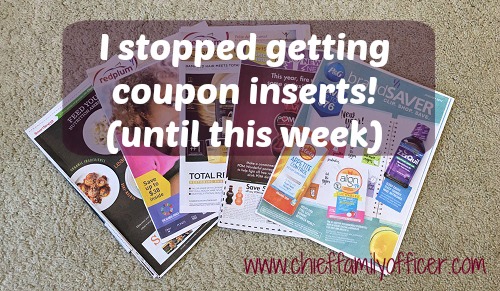 My LA Times Sunday subscriptions (I had 3) expired last summer. I don't remember the exact renewal rate but it must have been close to $100 for all three subscriptions because I decided to cancel.

This was after I called to ask for a lower rate and got stonewalled. I don't understand why they'll give new customers a year of Sunday for $10 but would rather lose a long-time customer than give her the same rate.

Finally - last month - they did offer me the lower rate. I received a mailer for new customers and customers who hadn't subscribed in six months. The offer was for a year of Sunday delivery for $9.88 (although it ends up being several weeks short of a year, because they bill their "special issues" at a higher rate - sneaky!).

This past Sunday's paper was my first issue - historically, the first inserts of the year are good ones - and I'm happy to have some of the high-value coupons that aren't available as printables.

But I didn't miss the insert coupons too terribly - certainly not nearly as much as I feared I might. For one thing, I don't coupon as heavily as I did a few years ago. And for another, the printable coupons have gotten much better than they were a few years ago, so I didn't feel like I was missing out on much.

I think at $10 for a year, the LAT inserts are a great deal, but I would terminate my subscription again rather than pay more.

How do you feel about insert coupons vs. printable coupons?
at 1:20 AM

I was in the same boat. I used to get 6 Sunday papers and was paying the $10/yr rate per paper. They then wanted to change each subscription to something like $65/yr. It just doesn't make sense that they wouldn't want to give me a discount to keep my 6 subscriptions since they make money from advertisers based upon the number of subscriptions. I am also waiting for a new code to get me back to the $10/sub/yr. I've gone 3 months without it now. Like you I don't miss it terribly but there have been a few deals that I wished I had my 6 papers! Oh well, still waiting!

Yes, exactly! I hope you get the offer from them soon!