Books I Read on My Trip 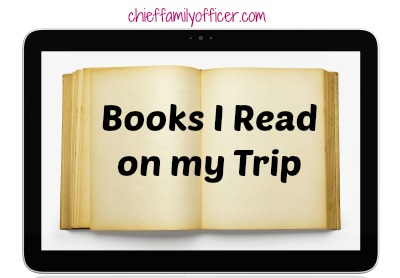 This post contains affiliate links that help support this site at no additional cost to you. Thank you for clicking through them! You can read CFO's full disclosure here.

The biggest downside to my trip to Japan was the travel time - when you factor in time spent waiting at the airport, it was 17 hours from when we arrived at LAX to when we touched down in Tokyo. And about the same coming back. So I took a lot of books with me - which, thanks to digital versions, was much easier to do than it would have been ten years ago. Although, accounting for the possibility that technology wouldn't always be available, I did have a few paperbacks.

On this trip, I went for entertainment, not education. I felt challenged enough traveling in a foreign country with a ten-year-old, and wanted my reading to be a true pleasure. So here's my reading list from the trip:

The Sixth Extinction by James Rollins - This is the tenth book in the Sigma Force series, and was just as good as the rest of the books. It's also a long book, so it was perfect for the loonnnggg flight!

"Surely You're Joking, Mr. Feynman!": Adventures of a Curious Character: Adventures of a Curious Character by Richard P. Feynman, a Nobel-prize winning physicist - I had added this book to my wishlist after it was referred to by James Clear, and it was even better than I thought it would be. I had thought my son would enjoy it too, but there were a few anecdotes that would be inappropriate for a ten-year-old so I didn't recommend it to him.

Ready to Kill by Andrew Peterson - This is the fourth book in the Nathan McBride series. If you like the other Nathan McBride books, you'll probably enjoy this one too.

Rip Tides by Toby Neal - This is the ninth book in the Lei Crime series (yes, if I like a series, I tend to stick with it!). I particularly love these stories because they're set in the Hawaiian Islands, and pretty accurately reflect the culture there. The descriptions of Maui and Kauai have me wanting to do the tourist thing there, as I haven't been to Kauai since I was little or to Maui since college.

Unsound and Stolen in Paradise, also by Toby Neal - The protagonists in these books are from the Lei Crime series, so they're familiar, but with a new perspective.

Blood Moon by Alexandra Sokoloff - This is the second book in the Huntress/FBI series. The origin story of the serial killer is an interesting one, but I'm not so enamored of the series that I will keep reading unless they are $0.99 for Kindle.

Twenty-Nine and a Half Reasons by Denise Grover Swank - I read the first book in this series, Twenty-Eight and a Half Wishes, a couple of years ago and thoroughly enjoyed it so I'd been saving the sequel for a special occasion, like this trip. I don't think it was quite as charming as the first book, but it was still a page turner. (Go get the first one - it's FREE right now!)

And in case you were wondering, my son read The House of Hades by Rick Riordan (Book 4 in the Percy Jackson series), and whatever was next for him in the A Series of Unfortunate Events series.

Incidentally, I don't have an actual Kindle - instead, I uses the free Kindle reading app on my iPhone and iPad mini. I bring those devices with me on any trip anyway, so I'm not adding any extra weight to my luggage!

Image via FreeDigitalPhotos.net by adamr.
at 7:45 AM