Why You Need a Will (and Life Insurance) 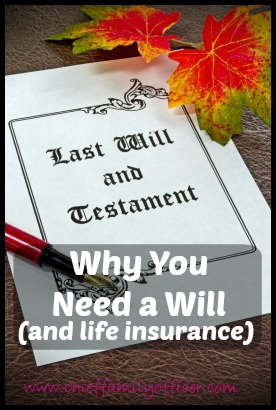 One of the most unexpected and devastating deaths on TV came earlier this season when Lance Sweets was killed in the line of duty on Bones. He left behind his pregnant girlfriend Daisy, who gave birth a few episodes later. {With all the spoilers I come across, I'm amazed at how they kept this one under wraps until it aired!}

Because of what I do for a living, I couldn't help wondering what kind of financial mess he left behind. I think Sweets was the kind of guy who'd think things through - he worked for the FBI, and was out in the field all the time. So while he certainly didn't expect to be killed when he was, I'd like to think he had made out a will naming Daisy as his primary beneficiary and/or set up a trust for the baby's benefit.

Part of the story line in Bones was that Sweets's adoptive parents had died and he was an only child, so theoretically, there shouldn't be anyone contesting the will. But unless he'd put all of his property into a living trust that made Daisy the trustee upon his death, his estate would have to go through probate. If he had a will, the process might take a while but at least it would be straightforward.

But if he didn't have a will, two painful scenarios immediately popped into my head: First, the probate judge might require proof that Sweets truly was the father of Daisy's baby; and second, someone might come out of the woodwork, claiming to be a relative of Sweets and therefore entitled to all or part of his estate. At least once the judge accepted that the baby was Sweets's child, state law should mandate that his entire estate pass to his child.

I've also been hoping that Sweets would have thought to name Daisy the beneficiary of any life insurance policy he might have had. Then the proceeds from the policy shouldn't have to go through probate. I can't think of anyone else he would have named as a beneficiary, but supposing he did have a policy that didn't benefit Daisy or their child, there could be another mess - state law might supersede the named beneficiary once the baby was born, and appoint the baby as the default beneficiary. Then there might be a legal battle as to who is entitled to the life insurance proceeds.

The bottom line I take from all of this thinking: Take care of your estate planning while you can. Have an up-to-date will. Make sure the beneficiaries listed on any policies and accounts are current. Don't leave a financial mess for your family to deal with when you're gone.

Image via FreeDigitalPhotos.net by Mister GC.
at 6:00 AM