Throwback Thursday: To be Happy, Match Your Words and Actions

This post was originally published back in 2009. I think it's still completely true. 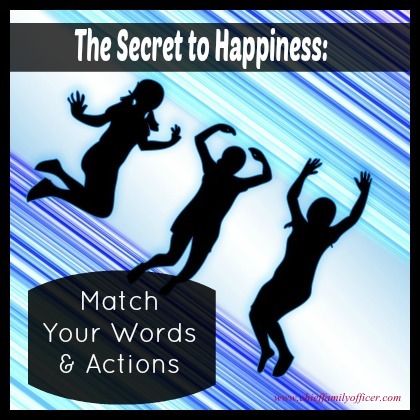 It seems like everyone I know is complaining about their financial picture these days. I sympathize because I know that our financial picture is better than most, but we're still tightening our belts because it seems some kind of income reduction is on the horizon.

Meanwhile, I want to make an observation that applies not just to finances but to life in general: the happiest people are the ones whose words and actions match.

Finances are an easy way to illustrate what I mean. I have a friend who makes decent money but has a hefty mortgage, so money is always tight. He complains about not having enough money, but doesn't do anything about finding a second or third source of income. He says he's trying to bring in more money by doing some tutoring, but he actually spends his time on other, non-income-generating hobbies. And when someone suggested he stop some of his extracurricular activities so he would have more time to spend on tutoring, he simply shrugged it off. I can't help but wonder sometimes if he likes being miserable.

On the flip side, I have another friend who's lost her job and is balancing finding a new job with arranging educational services for her preschooler, who was recently diagnosed as having high-functioning autism. She says her family needs her to work, and she's working hard to find something new. She diligently completed the requirements for getting unemployment benefits, despite having to deal with a mind-numbing bureaucracy and an insanely rude employee who brought her to tears. She vented to me about that, but not in a self-pitying way. Meanwhile, she found a job but two days before she was to start, she was told they couldn't hire her after all. So she's looking again, and is optimistic that she'll be able to find something soon.

Needless to say, she's a happier person than my other friend, who seems to want something other than what he says.

I go back to something I've said before: To achieve financial success, you have to be honest about your priorities.

What are my male friend's true priorities? I don't really know. But I know he's not going to be happy until his words start to match up with his actions.

Image via FreeDigitalPhotos.net by supakitmod.
at 6:00 AM