My Completely Stupid, Totally Avoidable $140 Mistake - and How I'mMaking Sure I Never Make the Same Mistake Again 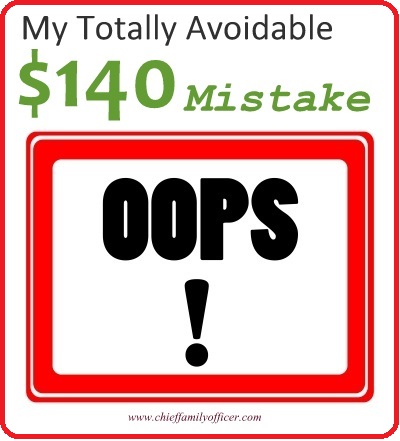 When you work really hard to save money, a simple mistake that ends up costing your family an extra $140 is psychologically devastating. And yet, that's exactly the kind of mistake I made a few months ago.

Every story has a beginning, a middle, and an end.

So here is The Beginning:

For years, I have paid bills not when they arrived, but shortly before they were due. I did this to maximize the interest we earned by keeping money in the bank. It's not a lot, but every penny counts.

And here is The Middle:

The boys were born. I became busier - and more distractable - than ever. I also went almost completely paperless when it comes to paying bills. I have a file on my desk where I collect the few paper bills that come in throughout the year, and a sheet of paper that I write current paperless bill payment amounts and due dates on.

You can probably guess The End:

I looked only at the sheet of paper, and didn't actually open the file on my desk . . . which meant I never saw the DMV bill until a month after it was due. If it was just the late payment on the DMV bill, that would have been one thing. But we'd gotten the required Smog Check done right after the bill arrived. Who knew that Smog Checks are only valid for 90 days if you don't pay your bill on time? And of course, the Smog Check had expired two days before I noticed the overdue bill.

Naturally, I called and spoke to various people to try to get the DMV to accept the very slightly expired Smog Check. But the last person I spoke to told me to go back to the place where my husband had gotten the Smog Check and ask them to post-date it. That seemed so fraudulent, I didn't even try. Instead, I paid the approximately $60 for a new Smog Check, on top of the extra $80 I paid to register the car late, for a whopping $140 mistake.

Picture this: Me banging my head against the wall

Needless to say, ever since this debacle, I've been paying bills as soon as they arrive. Forget maximizing accrued interest. With interest rates so low, I blew years worth of interest with the $140 we had to pay to cover my mistake. I've also vowed to pull out that file and look at it every month when paying the bills. I know I will make mistakes in the future, but I will not make this one again!

Have you made a totally avoidable but costly mistake?

Image via FreeDigitalPhotos.net by digitalart.
at 3:30 AM

I use my bank's free online billpay for most bills, which allows me to do my end of paying bills when they arrive but I can set the date that the bank pays them, so I'm maximizing the time the money is in my account. (Of course, these days with interest rates so low on interest checking accounts, I don't think it actually saves me any money, but there's a principle involved on not giving them money before it's due. :) )

For bills that I can't pay with an online billpday, I set a reminder on my calendar for the date I need to snailmail something. It helps (as long as I don't lose my ipod touch and therefore my calendar!).

Great idea, Aviva! I am going to start putting the due date for the snail mail bills in my calendar, with an email reminder. Brilliant!

Ugh! You've reminded me that back when I used to send checks, I wrote the check not for the balance of our credit card bill, but for whatever the balance was in our checkbook after I deducted that amount. It took me a while to figure out why the balance was so off later, and then I felt SO stupid, but I was lucky because somehow we avoided any banking fees. And that was when I switched to duplicate checks, so I could always see what amount I'd written out. At least your mistake was a lot less costly than mine! I wish I could think of a way to avoid it happening again, but other than setting up a calendar reminder to check that you've actually made the payment, nothing comes to mind. Thank you for letting me know I'm not the only one making mistakes!

I completely understand that. I have been the "bill payer" in my marriage since we got married due to my husband's military job. Even after he got out, somehow I am still roped into it. I guess I got a system down.... but sometimes I hate it because I always know whats going on so when he asks me so can we buy this sometimes its no especially end of the year or beginning of the year when I am trying to get us back under some kind of a budget. I still write out a few checks because the "online fee" for paying it online is ridiculous... stupid HOA. A $12 fee is ridiculous. LOL my husband and I fight about the principal of writing checks every couple months... its one of our on going fights like which pb is better than the other. But I don't write out the balance after I write checks/pay bills I just keep track in my notebook (small ledger book). I think he thinks I am going to forget or assume its paid. I cannot believe we used to only rely upon checks as a nation.... they take so long to process sometimes!!!!!

I hear ya! My jaw drops on those rare occasions when someone whips out a checkbook at the register. And I won't pay any fee to pay with a credit card or online processing either. So you're definitely not the only one!