The Jardine crib recall is being handled poorly 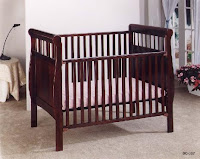 Before I get into the recall, I have to give you a little background. When my oldest was 18 months old and I was seven months pregnant with his brother, I decided to cross my fingers that our older son would continue to sleep in his crib for at least another six months and bought a new crib. Needless to say, less than two weeks after we set up the new crib, our older son climbed out of his. But because his crib converted to a toddler bed, that's what he's slept in since that fateful day.

Fast forward almost two years. A few weeks ago, I reported that Jardine had recalled over 300,000 cribs . It wasn't until last Friday, when I was reading Freebies 4 Mom, that it finally registered that our second crib was made by Jardine.* I immediately checked the model and date codes, and realized it was part of the recall. I then completed the online submission form to receive a voucher for a new crib.

Of course, the remedy per the CPSC press release announcing the recall states: "Consumers should immediately stop using the recalled cribs and contact Jardine to receive a full credit toward the purchase of a new crib." So we decided to get our older a "real" bed and re-convert his bed back into a crib. It took all Sunday, but we did it. And our older son is thrilled. (Our younger son, not so much. I think he was hoping to get the converted crib as-is.)

Meanwhile, yesterday, I received a UPS envelope from Jardine, directing me to send them the mattress support hardware and identification label back to them in the enclosed envelope in order to receive my voucher. I couldn't believe it. Nothing at their recall page alerted me to the need to save anything from the crib. We had dismantled the crib on Sunday, and left the final large pieces on the curb for oversize pickup yesterday morning. And while we might have saved some of the screws, we didn't remove anything else from the crib during the dismantling process. (A copy of the letter enclosed in the UPS envelope is available on the web site, but the link leading to it simply says "review more detailed instructions." Nothing about it alerted us to the need to keep any hardware.)

If I actually needed the voucher now, I would be irate. Fortunately, I don't, so I am just writing about this here to warn other Jardine owners not to act hastily if your crib is part of the recall. I can understand the company's need to protect against fraudulent claims, but they need to inform customers who are completing the online submission form that they will need to send in parts of the crib to receive the voucher. I can't be the only proactive parent who didn't want to wait for a voucher.

As a side note, the Baby Bargains Book Blog is reporting that Babies R Us will honor the voucher for online purchases, but you need to front the cost and then get reimbursed. (Read their post for more details.)

*I never liked the Jardine crib much anyway. You could tell it was $100-200 cheaper than our first crib (I can't remember what brand it is, but I know they don't sell the same model anymore). The rail on the Jardine never went up and down smoothly, so there was no hope of laying a sleeping baby down and then quietly sliding the rail up. The wood also came off the slats with the slightest scraping, so there were a few spots where I had accidentally scratched off some wood and paint with my engagement ring. It's not hard to understand why the recall was for possible breakage of the slats and spindles. If I could do it over again, I definitely would have chosen a more expensive, better-made crib.

Email ThisBlogThis!Share to TwitterShare to FacebookShare to Pinterest
Labels: companies

I agree that they are handling it poorly, because I called to request our recall kit as soon as I got the alert (about 4 weeks ago) and have received....nothing! I was very irate about the recall in the first place, because my due date was coming up. The person on the phone seemed totally unconcerned about the fact that our baby would probably be here before a new crib would. However, she did warn me that there would be hardware to turn in, so it sounds like there is some internal communication breakdown between the phone hotline and the online service department.

Babies R Us let us have store credit for the old crib. Ironically, the replacement is also a Jardine (not on the recall list). The other brands were either horrendously expensive or had parts sticking out at the top, which I didn't like. At least we have a new one, and could get it before baby comes (he's still not here! :). No thanks to Jardine.

@Westy - Congratulations on your baby! I'm sorry about your frustrations, but I'm glad BRU was helpful.