On Monday, I discussed what it means to be an Obliger in Gretchen Rubin's Four Tendencies framework. As much as I wish I were different, Gretchen says, and I agree, that it's easier to work with your tendency than to try to change it. 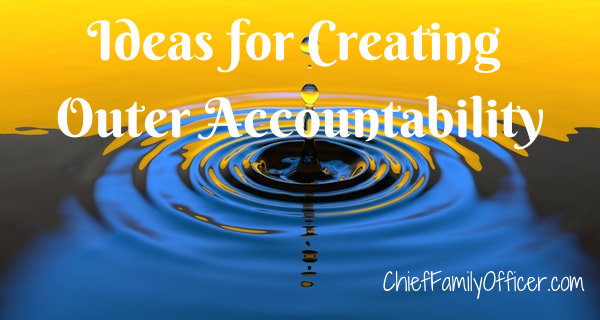 That said, she also says things like, "all an Obliger has to do is create outer accountability." But for me, it's not that easy, and it's what I hate most about being an Obliger. In the years since I learned that I'm an Obliger who needs external obligations, I've learned a lot about how to create them. I still haven't found a magical way that infallibly works for me, but I do have some insight on how you can create outer accountability for yourself:

Make a to-do list. This is super basic, but for some Obligers, it actually creates enough accountability to get things done. Personally, I find that I'm much more likely to do something if I have an actual written list, because for some reason, I feel an obligation to cross things off.

Find an accountability partner or group. Two Obligers holding each other accountable can be a beautiful partnership, but I've never found someone like that in my own life. My husband is a Questioner, and as much as I would like him to hold me accountable at times, he doesn't want that role (which is common with Upholders and Questioners, who readily meet inner expectations and therefore don't understand why Obligers can't do the same; Gretchen also points out that significant others often make poor accountability partners because the Obliger doesn't consider them truly external). However, kids can be great accountability partners for certain goals, like not swearing or using your phone in the car. If you're interested in forming a group, Gretchen has a free app called Better, where you can find like-minded people who are familiar with the Tendencies.

Think of yourself in the third person. It can be helpful to think of what you owe your past or future self, which sounds odd but actually works well for Obligers. When I remember to think of my future self, it's easier to do things that benefit my health, like work out and eat better.

Pay someone. Take a class, hire a trainer or life coach, etc. You're much more likely to show up if someone is waiting for you. But this doesn't work if you're the kind of Obliger who thinks "I've already paid for it, so what difference does it make?"

Have someone pay you. This can be more effective than paying someone else. If you have a customer, client, or student expecting you to do something, you'll do it.

Create a deadline when someone will expect something from you. You might not be able to get someone to pay you, but you can still create self-imposed deadlines with outer expectations if you announce the deadline to others. For example, if you have a work project without a solid due date, pick a date and tell your boss that you'll have a draft ready for review that day. If you want to run a half-marathon, pick a race and then tell your friends and family that you're training for it and expect to see them at the finish line.

Get creative. If you have a specific task or habit you're trying to achieve, thinking outside the box can be especially effective. Gretchen often tells the story of an Obliger who was struggling to get up in the morning, so she set an embarrassing Facebook post to automatically go live every morning and now she has to get up to turn off the auto post.

Are you an Obliger and if so, how do you create outer accountability?
at 3:30 AM

Email ThisBlogThis!Share to TwitterShare to FacebookShare to Pinterest
Labels: productivity