As I've mentioned a few times, I've been doing the Whole30 this month. It's meant a lot of changes to what I eat, but the most challenging change has been eating more vegetables. For one thing, I'm not a huge salad eater, at least if I'm the one making them, especially in the winter. (I know 50-60 degrees isn't cold to a lot of people, but it's cold to me!)

So I'm cooking a lot of vegetables, which has meant a lot of additional cooking. In fact, this Kitchn writer agrees with me that it's hard to cook and eat two vegetables at every meal, which she did when she spent a week eating like Queen Elizabeth. It also took me almost two weeks to realize that I had to buy way more veggies than I was used to! 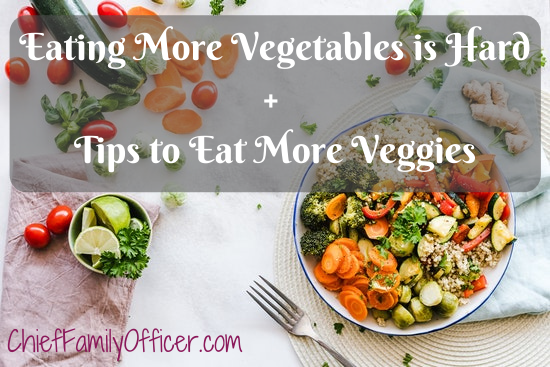 But I'm figuring things out. Three weeks into the Whole30, I have some tips on how to make eating more vegetables easier:

Buy more veggies than you think you need. This tip is especially relevant if you're replacing other foods (like rice or bread) with veggies, because you should ...

Prep and cook in bulk and/or batches. If you've bought a ton of vegetables as recommended above, the best way to make sure you eat them is to prep and cook in bulk or in batches. For example, if you bought six heads of broccoli, break them all down into florets and cook them at once. They'll be good for days, and you won't feel like you're doing the same task over and over again, the way you would if you cut and cooked them one head at a time. If you don't have a pan that will fit that much broccoli, cook it in batches, or steam half and roast the other half. If you've bought the components for a salad, do all of your washing and chopping at once, and make a bunch of meal prep salads.

Experiment with different techniques, spices, and sauces. My kids think carrot sticks are okay, but they've been devouring roasted carrots for the last week. And lately, I've been putting balsamic glaze on roasted Brussels sprouts, and Aleppo or cayenne pepper on steamed veggies.

Have some easy go-to vegetables. This way, when you don't feel like doing much chopping and cooking, you can still get veggies on the table. For me, it's spinach and sweet potatoes: I can sauteé the spinach and microwave a sweet potato to get two vegetables on my plate at any meal.

How do you make sure you're eating your veggies?
at 3:00 AM