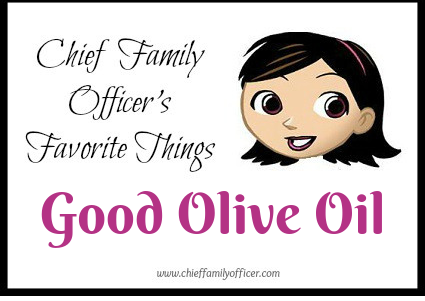 As I've mentioned in the weekly newsletter, I recently read The Dorito Effect: The Surprising New Truth About Food and Flavor, and it's got me thinking an awful lot about flavor now. I've been shopping at the farmers market (and have decided that the food I buy there does indeed taste better), and exploring specialty locally-produced foods, like milk. I was a little surprised to realize, though, that I started on this journey almost a year ago, when I started buying California Ranch Extra Virgin Olive Oil. 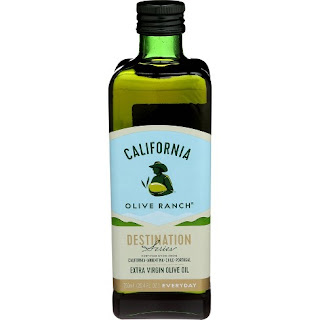 I'd been reading a lot about how most grocery-store olive oil isn't fresh at all, and might actually be rancid, even though it doesn't scream rancid when you taste it. I'd also read that Ina Garten swears by Olio Santo - which was initially sold out when I went to go buy it, probably because Amazon's stock had been swept up by Ina fans.

I then did some independent research, and kept coming up with California Ranch Extra Virgin Olive Oil as the go-to, everyday olive oil of many chefs. It was in stock at Amazon, and more affordable, so I gave it a try, and it had so much more flavor than the extra virgin olive oil I had been using (sometimes I'd buy the giant Kirkland bottle at Costco, sometimes I'd buy whatever looked good to me at Trader Joe's). It's fruitier and has more depth, and it's subtle but definitely noticeable. When I first made the switch, my husband kept telling me that whatever I'd cooked with the oil (main dish or side dish) was particularly good.

I gave a slightly more expensive California Ranch variety a try, the Arbequina, which was stronger, but slightly too sharp for me. I did eventually get my hands on a bottle of Olio Santo, and it's also stronger, but more mellow, so I prefer it. Now, I use the California Ranch for everyday cooking, and the Olio Santo for times when the flavor of the oil is front and center, such as in dressings.

I've discovered that the best price for California Ranch Extra Virgin Olive Oil is at Target, especially when there's a sale or Cartwheel offer. If you're an Ina fan, and/or you want to try the Olio Santo, Amazon now offers a two-pack for $39, which is slightly cheaper per bottle than the $20 single bottle I've bought previously.

Do you have a favorite olive oil?

This post contains affiliate links that help support this site at no additional cost to you. Thank you for using them! You can read CFO's full disclosure here.
at 5:20 AM