What You Do Matters More than Where You Go - Parenting

For the last few years, I've been reading a lot about millennials, Generation Z, kids who feel entitled, helicopter parents, and so on. It's been a mild cause for concern, in a distant sort of way.

But I just finished reading Frank Bruni's excellent book Where You Go Is Not Who You'll Be: An Antidote to the College Admissions Mania, and I have to admit that I saw myself in many of the stories he told. 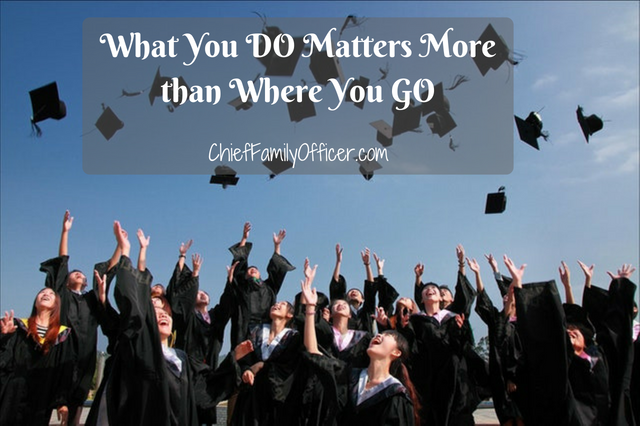 I may not have the money of a family that sends their children to an elite prep boarding school for tens of thousands of dollars a year, takes "service" vacations so their children can say on their college application that they did volunteer work in a third world country (apparently that's a real thing), or spends thousands more dollars on SAT prep and private college counselors.

But I am the parent who examined matriculation lists to see where a high school's graduates went to college. I wrote off a prominent local Catholic high school because I was unimpressed by their matriculation list - not just no Ivies, UCLA or Stanford, but no Notre Dame or Boston College either. The high school I've chosen routinely sends their alumni to all the UC's, a few Ivies, CalTech, and Stanford.

I've been determined that my children get straight A's, because anything less than an unweighted 4.0 GPA means the top schools won't even consider them. Part of my determination stems from the fact that I know they are capable of excelling in school. But it also means that I've been afraid that any little misstep might derail their future.

It turns out I'm not alone. Where You Go is Not Who You'll Be is filled with stories about parents like me. Our intentions are good - we're just convinced that the way to succeed in life is to do really well in high school and then graduate from a well-known, highly-respected college.

But I'm not convinced anymore. Now I'm convinced that success isn't dependent on where you go to college but on how much you put into it, and how much you get out of it. It's about going to a school where you can thrive, not about the name of the school on your diploma. Hawaii State Senator Kai Kahele gave an inspiring commencement speech at Hawaii Community College in Hilo about why he had to start at HCC (spoiler: he wasn't exactly stellar in high school) and how he'd turned his life around just a few years later:


In case you didn't watch the video above, here's the quick summary: Pete Velasco, a former U.S. Olympics men's volleyball captain, took 19-year-old Senator Kahele under his wing and trained him to be such a good a volleyball player that he went on to play for the University of Hawaii at Manoa, where he went to multiple national championship games. But even more than volleyball, Coach Velasco taught Senator Kahele the value of hard work, the necessity of being willing to fail, and the joy of helping someone else succeed.

This story could fit right in with the anecdotes in Where You Go. My favorite story from the book was about Bobbi Brown, the makeup artist and businesswoman, who wanted to drop out of the University of Arizona. But her parents wanted her to at least get a degree, so her mom asked her what she would do if she could do anything, and Brown said she would play with makeup at the department store makeup counters. Her mom then helped her find a school where she could study makeup, which is how she ended up at Emerson College, where they allowed her to design her own major in the theater department.

I love that story not just because it's about someone who became super successful taking an untraditional path. I love it mostly because of the understanding and compassion that Brown's mother demonstrated. She helped her daughter find a path that worked for her.

One of the recurring themes in Where You Go is about how students who follow the seemingly ideal path of excel in high school, go to elite college are afraid to color outside the lines. They meet a successful person and want a step-by-step guide on how to emulate them. This makes perfect sense to me because I think to a large degree, this was my path. It wasn't quite as difficult to get into the top colleges when I was going through the application process, and the industry that has grown around it didn't yet exist to the degree that it does now.

But I went to an elite private high school that sends its alumni to the Ivies and other top public and private institutions. And I remember my college counselor recommending that I go to a smaller private school, where I could shine, which in retrospect was excellent advice. I rejected it, and instead went to a larger private university with a student body of over 10,000 (and the only school that didn't offer me any scholarship money - sorry, Mom and Dad). I chose the school because I loved the campus and I thought I would have lots of opportunities. I even got into the honors program.

But maybe that was the mistake, because what I realize now, with the benefit of hindsight, is that although I was smart, I wasn't as smart as many of the other students. So I faded back instead of flourishing, and while I did fine, graduated with a relatively high GPA, and went on to an excellent law school, I do think about what might have happened if I'd taken my counselor's advice and gone to a smaller, less selective school.

Where You Go is full of stories about such students, who didn't get into the top schools and so ended up at smaller, less exclusive schools where they found themselves to be standouts. I am now open to the possibility that my children might be better served by following the example of these students than by following in my footsteps.

I've been a regular reader of Tim Elmore's Growing Leaders blog, which is about helping students succeed and become leaders. A main recurring message is that we have to let them do for themselves, and let them risk failure. I also recently finished reading How Luck Happens: Using the Science of Luck to Transform Work, Love, and Life, which defines luck as the intersection between talent, chance and hard work. And one of the messages of Where You Go is Not Who You'll Be is that hard work trumps the name of the school on your diploma.

I feel like I'm being pounded over the head with the message that the main lesson I should be teaching my children is to work hard. Not get good grades, not check off the boxes for your college application, and definitely not you can't make a mistake or get a B.

Hard work is something they can control. If they give it their all and they fail, at least they'll know they did everything they could. And hard work will serve them well throughout their lives, regardless of where they go to school or what they end up doing for a living.

This is something that I think parents know instinctively to be true, but it's something that we find difficult to teach. But it may be the most important lesson we can pass on.

This post contains affiliate links that help support this site at no additional cost to you. Thank you for clicking through them! You can read CFO's full disclosure here.
at 8:45 AM