Why You Should Move Without Moving

Over the holiday break a couple of weeks ago, we had our house re-carpeted and re-painted. It didn't sound like a big deal at first - just sprucing up the appearance of the house, nothing like the-down-to-the-studs bathroom renovations we've had done in the past. 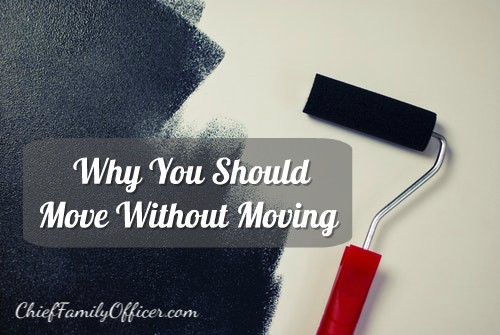 Re-carpeting requires that everything be moved out. (Which also makes the painting easier and faster.)

I'm kicking myself for not taking a photo of our two-car garage with almost everything we own piled high in it. It really was like moving without moving. We had to empty every drawer, every shelf, every closet. (With the exception of the kitchen, which needs a full remodel, so we're putting that off until we've saved for it.)

It was slightly less stressful than actually moving, since we didn't have to make sure fragile items were properly cushioned, etc. But it was definitely an eye-opening experience. Here's what I learned:

We have more stuff than we realize. A couple of years ago, I went through almost everything I own and shared my experience of following The Life-Changing Magic of Tidying Up. But this time, my entire family went through the purging process, and we ended up with so many bags of trash and donation items that I lost count.

Label boxes when packing up. This made it so easy to put things where they belonged when we moved back in.

Go through things every few years. Having to pack everything showed me that I don't have to keep stocking up, and that I am definitely an overbuyer, not an underbuyer.

Periodically re-think the way a room is set up. For instance, even though we didn't remodel the kitchen, it needed to be thoroughly cleaned after everything that had been stashed in it was removed. (It was so full, I couldn't access my silverware for a while.) When I was making the kitchen usable again, it occurred to me to relocate the microwave next to my countertop oven, instead of on the opposite end of the counter. This created a larger area of open counter space - so now the kitchen looks a little bigger, and I have a better workspace on the open countertop.

Empty space feels really good. Also, it's far easier to clean an uncluttered space. So when we were putting things back, my husband and I were pretty ruthless about de-cluttering even more.

Set up a donation area when you're putting everything back, if you don't have one already. I love how Andrea Dekker has made purging easy for her entire family, including her young kids. Getting my kids involved in purging is something I want to do. And while I have a donation station, it's in a visible corner so it's a bit unsightly. My goal is to get it into a closet somewhere.

The house looks and feels great, and it also feels like something of a clean slate. So while this was not an experience I want to repeat anytime soon, it was very worthwhile. If you've been feeling stuck, or overwhelmed by your possessions, this might be a good exercise for you. It's not realistic to suggest that you re-create the experience for yourself by packing everything up and then moving it all back. But try doing one room at a time. You'll probably feel lighter, and your house will definitely feel better.
at 8:15 AM

Email ThisBlogThis!Share to TwitterShare to FacebookShare to Pinterest
Labels: homemaking