The Secret to Changing Your Life: Know Yourself and Find Your KeystoneHabit 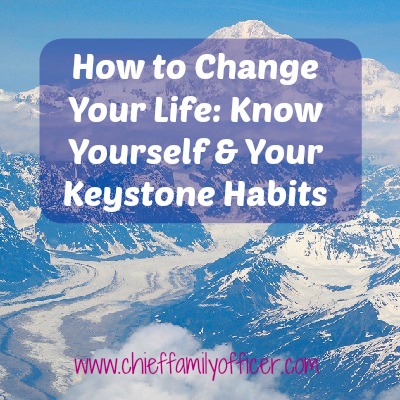 I just finished reading Gretchen Rubin's outstanding book Better Than Before, which discusses habit development from an entirely new perspective that I absolutely loved. The premise of the book is that because people are different, habit development techniques and strategies don't work the same for each person.

For example, Gretchen developed the Four Tendencies Framework to "describe how a person responds to expectations." I discovered that I am an Obliger, which means I tend to meet other people's expectations but have trouble meeting my own. I can't say I particularly like that about myself, though I do get some comfort from knowing that it's the largest group so I'm definitely not alone. And I can't deny that it's true, or that it's easier to work with my Obliger nature than to try to change it.

She also points out that habits relieve the need to make a choice, thus saving us mental energy, and that convenience plays a huge factor in our decision-making. Thus, if you want to change your habit of watching too much TV, you can make it inconvenient by putting the TV away in a closet.

There's a Q&A at the end of the book, and in it Gretchen observes that "Most of us have one or two habits that, if changed, would make a big difference in our lives." That immediately resonated with me, because a while back, I'd learned about the concept of "keystone" habits from James Clear, who explains that "fitness is the keystone habit the puts the rest of [his] life in place" - when he's in the habit of working out, he eats better, sleeps better, feels better, and is more productive.

I think these concepts are perfect together - the idea of identifying your keystone habit(s), and then using your knowledge of yourself to actually put those habits in place to change your life.

After much thought, I've come to think that my keystone habit is housecleaning. Because I don't have a set routine, and because I hate cleaning, I spend an inordinate amount of time and energy thinking about cleaning my house - which task to do today, when to do it, and so on. Whereas if cleaning was a habit, I would do it without thinking about it and I'd have all that time and energy back!

I'm a morning person (what Gretchen calls a "Lark"), so it's easier for me to tackle tasks earlier in the day. I've decided that I will do a daily cleaning task, like cleaning the bathrooms, first thing in the morning every weekday, as I soon as I get home from dropping the kids off at school.

(I've already made cleaning convenient by keeping supplies in each bathroom - but that hasn't been enough to develop a cleaning habit. By announcing my new plan to you and my family, I'm also creating outside accountability, which helps Obligers like me stick to our habits.)

Once cleaning becomes a habit, I won't think about it much, the cleaning will get done without the agonizing, and I'll have more energy to devote to other, more pleasant activities. At least, that's the plan! I'll give you an update in a few months.
at 4:45 AM

Thanks for this article, I will have to check out this book. I am similar to the way you are. I come through for others but when it comes to doing things I need to do for the house etc. I just don't have any motivation.

The book is really excellent, and Gretchen has a great writing style that's easy to read. Let me know what you think!