Why I Shop on Black Friday 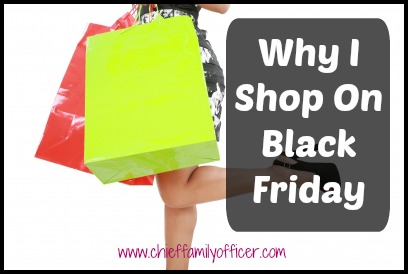 I first started shopping on Black Friday because my dad needed a new overcoat. This was B.K. - Before Kids - and my parents and I headed to Macy's at 7 a.m. We found the store was relatively empty and the sale prices were great . . . we were hooked.

The tradition of shopping at department stores on Black Friday continued for a few years, but it died out once the kids were born, and if I did any Black Friday shopping, it was from the comfort of my desk.

Fast forward to a couple of years ago, when one of my girlfriends suggested a middle-of-the-night post-Thanksgiving dinner Black Friday trip to the outlet stores. To be honest, I thought she was insane - who goes outlet shopping at 2 a.m.?!

As it turns, we do! There have been four of us the last couple of years, and there will be at least three of us this year, maybe more. Each year, I tell myself it's ridiculously crazy to leave the house after midnight and I think about not going, but then I go and I have a fantastic time. Mostly because I'm with some women I like very much, who are funny and fun - we talk up a storm, and find great deals for ourselves and each other.

And yes, the deals really are great - an extra 70% off at Kate Spade, an extra 20% off at Nike and Under Armour, 60% off at Tory Burch (not that I've actually bought anything there - even at 60% off, their stuff is pricey!).

I understand why some people are upset about the consumerism of Black Friday, and that some people hate that their loved ones work on Thanksgiving (though one year when I was at CVS, the cashier said she was happy to be working at time-and-a-half pay).

Personally, I wouldn't brave the crowds or stand in long lines alone. But I'll do anything with my girlfriends . . . and that's why I'll be out there again this year!

Image via FreeDigitalPhotos.net by David Castillo Dominici.
at 10:38 AM