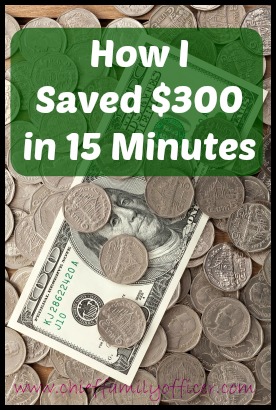 I've read for years that you can save money by asking medical providers to reduce the amount you owe, but the few times I asked, it never worked. Apparently, that's because I've always had health insurance, and a good plan at that.

But at the end of last year, one of the boys injured himself on a Friday evening, and after a quick trip to the pediatrician's office, we found ourselves at the Emergency Room on Saturday. The bills from that experience have been coming in, and I've learned a few things:

Lesson #2: They won't necessarily tell you upfront if they are members of your insurance network.

Lesson #3: The hospital and doctor don't really work together. What I mean is that in our case, the hospital was in-network but the doctor wasn't.

Whenever I pay a medical bill, I double check it against the Explanation of Benefits we receive from the insurance company to make sure the amount is correct. When I went to pay the doctor's bill, I realized that the doctor wasn't a member provider. No wonder the billed amount was in the $700 range!

The insurance company had already paid nearly $600. And apparently with an in-network provider, we would have owed approximately $150. But because the doctor wasn't in-network, we were being held liable for the additional $600 billed.

So I got on the phone with the doctor's billing agency to complain that I hadn't been told the doctor wasn't in-network and that if I had known, I would have asked for a different doctor. The customer service representative (CSR) who answered the phone assured me that every doctor in the ER was a member of the same out-of-network group of doctors that my bill came from, and then she said something that caught me off-guard: "Let me see what I can do."

Though I was surprised when she said that, years of reading frugal tips had prepared me for this moment. I immediately offered to pay the $150 I would have been on the hook for with a member provider. Unfortunately, the CSR said that wouldn't be enough. Her counteroffer was a reduction down to $500+. That was a $200 savings but still a lot of money! So I asked if she could reduce it further if I paid in full immediately. She put me on hold, and eventually came back with an offer that was $100 lower. The total was still a decent chunk of change, but about half of the difference between the original billed amount and the in-network copay. So I paid it off right there and then, impressed with myself for saving $300 in 15 minutes with one phone call.

And I have to admit, I was pleased that my years of reading almost every money-saving tip I can get my hands on paid off!

What's the most lucrative phone call you've ever placed?

Image via FreeDigitalPhotos.net by phasinphoto.
at 3:00 AM

Did you double check with your insurance company?? I would- I know that laws vary from state to state, but here in Florida, if the facility is in-network, the provider should be paid as if they are in network, whether they are or not. You generally don't have a choice of what doctor you see at a particular facility, so insurance covers it. For example, my husband had a procedure at a surgery center that was in network, but the anesthesiologist was NOT in network. We got a bill from the anestesiologist and I had to call the insurance company, but they did end up paying it as if the doctor was in network since we had chosen an in network facility. Perhaps you could save even more?? Good luck! :D

Oh, that never occurred to me as a possibility! Thanks, Jamie - I'm definitely going to check!