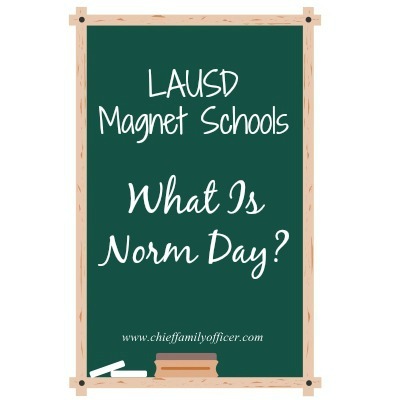 If you're an LAUSD parent, then you may have heard the staff or other parents mention "Norm Day" and wondered what it is, since this school year, it was this past Friday, September 12.

"Norm Day" is a day approximately four after weeks after the start of the school year that is significant to parents if you feel strongly about your child's teacher, and to school staff for a number of reasons.

On Norm Day, the student population count is considered "official" - that means budget determinations will be made based on those numbers.

This has a greater impact on schools than most parents realize. For example, positions that are dependent upon the number of students enrolled - such as a general assistant principal - may be added or taken away based upon the Norm Day count.

The number of classes per grade level is also fixed on Norm Day. So, for grades K through 3, the student to teacher ratio is supposed to be 24 to 1. Now, suppose there are three classes of second grade on Norm Day, but each class has ballooned to 30 students per class. Students will be removed from each class and a fourth class will be created. (I don't think classes would actually be allowed to get that big even before Norm Day, but that might depend on the school and/or budget constrictions.) Conversely, if the number of students is below the 24 to 1 ratio, the number of classes in the grade level may be reduced.

Because of the movement that is sometimes required after Norm Day, LAUSD does not guarantee the placement of your child with the teacher he or she has on the first day of school. And, schools generally do not accommodate a request to change teachers until Norm Day. If you like your child's teacher, you may find yourself breathing a sigh of relief once Norm Day has passed.

Norm Day numbers may also be used by LAUSD to calculate a school's budget. So while as parents we usually don't see the day to day work of the administrative staff, Norm Day impacts them greatly by determining the number of teachers, the number of staff, the amount of discretionary funds allotted, and so on.

Image via FreeDigitalPhotos.net by Grant Cochrane.
at 5:00 AM