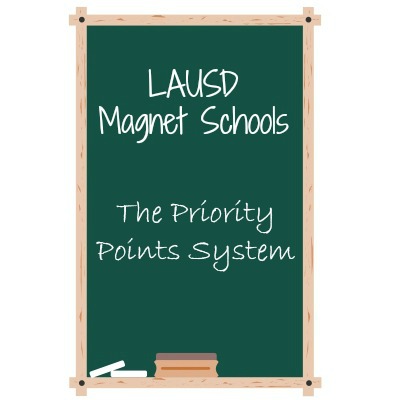 The Priority Points System for Magnet Schools admission may be the most confusing, frustrating aspect of the admissions process for many parents. Admission to an LAUSD magnet school is determined by using a combination of a priority points system, a random lottery system, and a student's race. Students with the highest number of points are admitted first. However, if there is a tie in the number of points, then a lottery system is used. The lottery is influenced by a student's race since the district must create a diversified student body.


Example: Magnet School A has 120 openings but there are 200 applicants with the following points (points are discussed in detail below):


The first three groups with 23, 20 and 15 points total 105 applicants, so they fill the first 105 slots. That leaves 60 applicants with 12 points competing for the remaining 15 slots.

The admission process now goes to a lottery system. But because diversification must be achieved, there are essentially two lotteries - one for "white" applicants and one for "non-white" applicants. Each school has a certain target racial composition, such as 60% or 70% non-white. Thus, the number of students admitted by lottery from each lottery group depends on the number of such students needed to achieve the school's desired racial composition.

Points are awarded to magnet school applicants as follows:

12 points for Matriculation - Students who are "graduating" from one magnet school receive 12 points when they apply to a magnet program at the next level.

4-12 points for being placed on a Waiting List - Students who have been previously placed on a magnet school's waiting list and are not already enrolled in a magnet program receive 4 points for each consecutive year of being on a waiting list, up to a maximum of 12 points.

4 points for students whose "home" school is a Predominantly Hispanic, Black, Asian And Other Non-Anglo (PHBAO) School - Students whose resident LAUSD school is designated as PHBAO receive 4 points (non-cumulative). {Note: PHBAO is pronounced "f-bah-oh" - LAUSD employees use it as a real word all the time.}

3 points for students applying to a magnet school attended by a Sibling. - Siblings must reside at the same address at the time of application.

For a more detailed discussion about Priority Points, check out LAUSD MAGNETS HANDBOOK: A Guide to Getting Your Child into an LAUSD Magnet School, available for just $2.99 at Amazon (affiliate link).

Image via FreeDigitalPhotos.net by Grant Cochrane.
at 5:45 AM