Flashback Friday: The Most Important Thing to Do if You Want to Be anAt-Home Parent 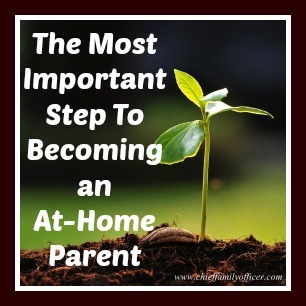 It's been six months since I quit my full-time job as an attorney and became a work-at-home mom. I'm as busy as I've ever been, and I can't imagine how chaotic my life would be if I still had a full-time, outside-of-the-home job. And that's been the biggest difference for me, working for myself and spending most of my time at home - my life has less chaos.

I was thinking about this today, after talking with a friend who's under a lot of stress. She's had a series of medical issues for the last six months, so things at home are chaotic. Add financial pressures to that, and her life is super stressful.

I couldn't help thinking that she'd be able to relieve some of the chaos if she didn't have to work, but her family's financial situation won't permit that right now. That got me thinking about all the preparation we did that allowed me to decide to quit my job. We took a substantial loss in income. But our lifestyle hasn't changed much.

And I realized that the most important step we took that allowed me to become an at-home-mom was not increasing our living expenses as our income increased.

We paid off all of our non-mortgage debt in 2009 and saved like crazy after that, until we lost my income. So for about eight to ten years, we lived pretty minimally. Between the increased cost of goods and having two kids, of course we spend more now than we did eight years ago, but it's not that much more. Most of our increased income has gone toward paying off debt and into savings, which is what put us in the wonderful position we're in today.

We certainly didn't get to where we are today in just a month, or even a year. It took years of living well within our means to pay off all of our debt and save up enough money that we felt we could handle losing my income. But it's all been worth it.

Image via FreeDigitalPhotos.net by amenic181.
at 4:00 AM