The Financial Effects of Getting the Flu 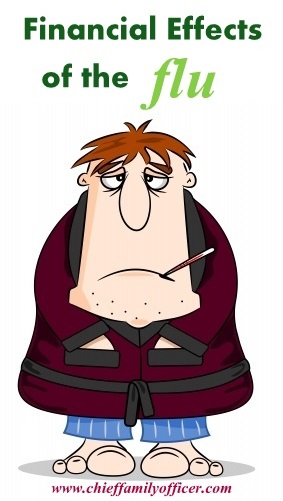 As I mentioned last week, I've been terribly sick. There was a bug going around school right before winter break, and I caught it, badly. I spent a few days pretty much entirely in bed, then another few days doing minimal things around the house. I still don't have all of my energy back!

I've had no desire to go shopping, so I missed out on a lot of bargains, including one of my most favorite sales each year, Target's day-after-Christmas clearance. It got me thinking about how grateful I was to have a stockpile, so that skipping some shopping didn't really affect our bottom line. I still have plenty of napkins, foil, disposable cups, wrapping paper, and the other things I usually hunt for in the day-after-Christmas sale.

I didn't even feel bad about the few full-priced things I needed, like cough drops. {Which I needed because I went through more than two bags in less than a week!}

On the flip side, though I had no appetite, everyone else in the family had to eat, so we spent a decent amount on eating out. In all honesty, though, we might have eaten out anyway because we tend to go out for meals during vacations just so the kids can get out of the house.

As I always am when something knocks me out of commission for a while, I am just grateful that money isn't a huge concern. The bills were paid, Christmas gifts had been purchased and wrapped, and we could afford to buy most of the food for a Christmas lunch that we were hosting. Never mind that I'd planned to make three or four of the dishes; everything was store-bought or made by someone else!

No financial stress during otherwise stressful times: that's the true gift of taking care of your finances.

If your financial situation is something you haven't been dealing with, I encourage you to start now! It's never too late to give yourself the gift of peace of mind. :)

Image via FreeDigitalPhotos.net by Grant Cochrane.
at 4:00 AM