One of the very first recipes I ever posted was for Crock Pot Shredded Beef Sandwiches: 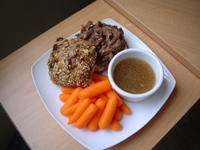 I've continued to make this dish regularly over the years, but as we've tried to eat less starch, I've taken to serving the beef by itself with some au jus. I usually do serve it with a roll or biscuit, but that's mostly for the kids' benefit.

1. Place the roast in a 4 or 5 quart slow cooker. Add the garlic, onion powder, soy sauce and water. Cover and cook on low for 8-12 hours, or on high for 4-5 hours. For a slightly thicker sauce, prop one edge of the lid up with a toothpick.

2. Remove the beef from the slow cooker into a shallow dish like a pie plate. Shred the beef with two forks.

3. If serving au jus on the side, use a ladle or fat separator to remove the layer of oil that's at the top of the sauce in the slow cooker.

Note: Leftovers freeze beautifully. I like to freeze big chunks of the meat, then turn it into hash using this recipe. I simply dice the meat into small pieces and start following the recipe in the middle of step 1, with the addition of the spices.

Banner ad via Escalate Media Network
at 4:00 AM

Email ThisBlogThis!Share to TwitterShare to FacebookShare to Pinterest
Labels: recipes

Hi there. The current Food on Friday is all about onions! So it would be great if you linked this in. This is the link . Wishing you very happy Holidays!

Cathy, thank you for linking this in to Food on Friday. We are now starting to get quite a collection of onion dishes together. Do stop by some of the other links to check them out!

Ps I have just signed up to follow your blog on Google Reader. A follow back to Carole's Chatter would be wonderful – or have you already followed? Cheers