Artisan Bread Update: This Recipe Has Changed My Life! 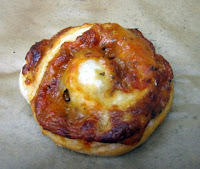 Background: For Christmas, I received a book about making artisan bread in five minutes a day. You can read my progress thus far here, in reverse chronological order.

To say that Artisan Bread in Five Minutes a Day

has changed my life isn’t an exaggeration. The most important change has been in feeding my kids dinner. Even if they dislike the entree – which, alas is more often than not – they’ll eat the fruit and freshly baked bread that’s on their plate. So they still get enough calories and I don’t worry that they’re going to bed hungry. (Read my previous posts about feeding the boys.)

The artisan bread method works unbelievably well. It really is as simple as mixing up a batch of dough, letting it rise on the counter for a couple of hours, and then parking it in the fridge until you’re ready to bake. I was thrilled to find this FAQ on the authors’ web site yesterday, because it suggests a great weekday method for people like me, who come home in the evening and then make dinner: the refrigerator rise. I’m excited to try it, because I’ve previously discussed my timing issues.

Now that we’re at the end of January into February, I’m wondering what I will do when the weather warms up and I no longer want to use my regular oven on a daily basis. I’ve had some success baking bread in my toaster oven, but it’s not my favorite because I keep worrying that the bread will rise too much and be too close to the top of the oven. I’m contemplating a new toaster oven that has more height, but I hate spending money on a new toaster when I’ve got a perfectly good one already.

One word about leftover bread – it really doesn’t taste as great when it’s not fresh. I’ve taken to putting it in the freezer, and when there’s enough, I make a strata.

Note about the image: It's a pizza wheel I made using the authors' directions. These have been great to keep in the freezer and have on hand for fast and easy lunches.

Disclosure: I'm an Amazon affiliate, so any purchase you make after entering Amazon through a link on Chief Family Officer supports this site at no additional cost to you. Thank you!
at 11:30 AM

I noticed a comment or post on their blog the other day on how to keep the crust crisp. They remarked that they just try to make enough for one day. I'm thinking I may do that. I've been baking a big chunk, but now my 3 year old asks for the "crunchy" bread. :-) I'll just decrease the size and bake more often!

I make mine in the toaster oven in an actual bread pan in the summer. Not as good, but it works.

Thanks for the update! I checked out the book from the library loved it and am planning on buying it. You've just confirmed my plan.
I haven't tried the recipes yet as I'm having to search out some of the ingredients in the small town I live in.
Looking forward to home made bread soon!
Lisa