When is it worth hunting for cheaper gas? 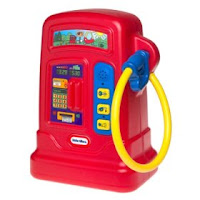 It's no secret that gas is cheaper at Costco than it is anywhere else. So earlier this year, when gas hit the $4 mark (gosh, was it really only a few months ago?), we got in the habit of filling up at Costco every week. We'd go early in the morning and there would rarely be a line.

But for the last month or so, as gas prices went over the $5 mark at some stations here in Los Angeles, we would arrive at Costco and find the line unacceptably long. For some reason, a line that's just two cars deep at Costco means a solid 20-minute wait. With two kids in the car, a wait that long simply isn't an option. So we bit the bullet and filled up at a nearby gas station for 10 to 15 cents more per gallon.

You've probably noticed, though, that gas prices have come down some. It would seem that many of Costco's patrons have noticed too. This week, there was no line when we went to fill up. Even though Costco's price for premium is now 20 to 30 cents less than other gas stations.

As for us, now that we're in the habit of getting gas at Costco, we'll keep it up. Regardless of what the price of gas is, we'll always be saving money by buying our gas there than somewhere else.

What do you think?

*On a related note, check out One Caveman's Financial Journey's article about continuing to save money on gas even as prices fall.

Email ThisBlogThis!Share to TwitterShare to FacebookShare to Pinterest
Labels: money

I am also in the LA area. We ALWAYS go to Costco for gas. How could you not? It is cheaper and even when gas was around 2 dollars a gallon, you still save money. I think it is one of the easier ways to be frugal :)

I'm in the Pacific NW. I'll happily fill up at Costco if I am there anyway, but if the line is at all long, I won't wait. I fill up when I need to. It's not enough of a savings for me to chase gas prices. With an average fill-up of 11 gallons every 2-3 weeks, a $.10 a gallon price difference is only a dollar.

I think it makes sense to hunt for cheaper gas one time... noting how prices differ along regular routes. Shopping it often would seem to be a huge time cost.

Thanks for pointing out my post. I started shopping around back when gas was $2.50/gallon and I don't see any reason to forgo any savings as long as getting those savings doesn't cost you more than what you save...

Sam's Club is only occasionally cheaper than the "regular" gas stations around here (and usually only by a penny). It's an out-of-the-way drive as well, so I only fill up there when I know it's cheap enough to justify the drive or if I'm going to be shopping there for groceries anyway. Checking online usually helps to find the best price, but it's not fool-proof.

We don't have many options in my town - 3 or 4 gas stations. There is one gas station that changes their prices when they go up a few hours later so there will be a wait of around 7-8 cars in each lane. For .10/gallon, it is NOT worth my time to wait for an hour or more and then listen to my kids scream the entire time!

If I am near Sam's Club or happen to be in that town, I will go there and fill up because it is cheaper to to that!

I'm really lucky because I only live about a mile away from my Costco, and it's in the same shopping center as my grocery store that I hit every week. It usually has cheaper gas than most places around us, and I get 3% cash back on my Costco American Express (that I pay in full every month :-) ).

Thanks for bringing this subject up.

@Erin - That's a good way of thinking about it. In the past, we'd tried Costco and just gave up b/c the wait wasn't worth it. But not that we're super early birds, thanks to the kids, it's easy to get there when it's not busy. So yes, it is definitely one of the easiest ways we'll save a few bucks each week :)

@CCS - Wow, I have to fill up every week! Your every 2-3 weeks makes me green with envy.

@Sean - I agree, if you're constantly driving around looking for cheaper gas, it does seem silly. I was thinking more along the lines of if you already knew a certain place was cheaper but it was a bit of a hassle to get to. It doesn't seem worth it to a lot of people!

@Caveman - Great tip to check online, I hadn't thought of that, thanks!

@Briana - I totally understand. Cheaper gas is not worth driving the kids crazy and them driving you crazy back!

@Corrie - Hm, we just use our Amex Blue Cash at Costco, but I might have to look into the Costco card. Thanks for the tip!

I will have to make a point to see when gasoline can be purchased - our Costco stores in Phoenix don't open until 10am in the morning, I always assumed the gasoline section wasn't open until then as well.

Thanks for the interesting post. The following sites have been really helpful to me:

I tend to use those sites when I'm going on a long trip (1000 mile trips are relatively common for me) and/or when I know that I will be taking a local route often. Gasbuddy.com is particularly helpful when planning a long trip because it visually color codes where the cheapest gas is, making it easy to find quickly. The MSN site, on the other hand, tends to have more gas stations listed, which may be more helpful for local stations. I tend to use both sites together.

I've also driven off frustrated by the lines at Costco gas. Now I go on the weeknights when I need to stop by costco for milk or food. They need a webcam so we can check the lines at costco before leaving the house :)

@Mrs A - Now that you bring it up, I think that's a big part of why we didn't start buying gas at Costco sooner. We didn't realize that it opens at 6:00, way before the store itself does.

@JJ - Thanks for sharing those great links!