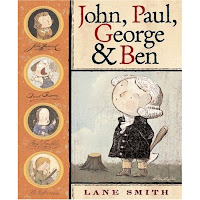 One of our favorite books to read with Alex is the one pictured here: Lane Smith's award-winner, John, Paul, George & Ben.

The art is great, the story is great, and it's somewhat educational. There is a short and irreverent vignette about each Founding Father - John Hancock, Paul Revere, George Washington, Benjamin Franklin and Thomas Jefferson. John Hancock, for example, is shown writing his name in huge letters on a chalkboard in elementary school.

So yesterday, Marc was explaining the significance of July 4th to Alex. He gave a rough description of King George and taxes, and explained how Jefferson ("Independent Tom") wrote the Declaration of Independence. And then, as Marc explained that John was the first of many leading colonists to sign the Declaration, the courage of these men really struck me.

I probably haven't reflected on American history much since my U.S. History class in college. But it was truly remarkable what these men did, putting pen quills to paper and just daring the English to kill them and quash their independence. And after they won the revolution, they didn't stop. They went on to craft the Constitution and our system of government, which, while not perfect, is better than any other system out there. I'm so proud and grateful to be an American.

P.S. My sentimentality might be attributed to the novel I'm currently reading for my book club, Matthew Pearl's The Dante Club.

It's a murder mystery set in the late 1800's, with famous poets as the main characters and Dante's Divine Comedy as a primary plot point. I'm about halfway through - the first 100 pages or so were exceedingly slow, but the last 100+ pages have gone quickly and I'm quite curious to find out what happens next.

Email ThisBlogThis!Share to TwitterShare to FacebookShare to Pinterest
Labels: holidays